An avalanche might hit even the calmest, most docile mountains, and you don’t want to find yourself ill-equipped when it does. That’s why most people are gearing up with specially designed backpacks that come supplied with an integrated airbag system that can and will save your life in a situation like that.

If you don’t already have one, stick with us as we review the best avalanche backpacks in 2020. 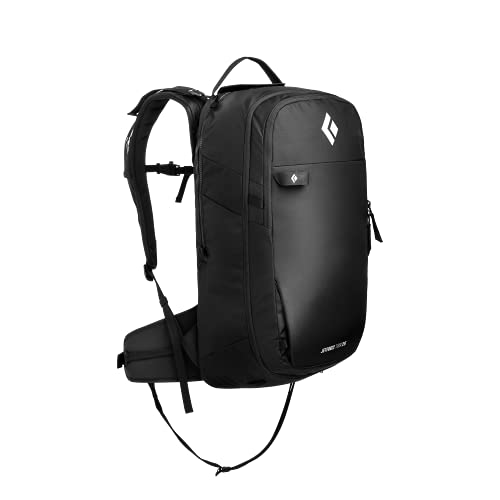 Let’s start off our review of the best avalanche backpacks with Black Diamond’s Jetforce Tour 26L Backpack as our prime pick. In a nutshell, it’s the sturdiest, best feature-packed avalanche and skiing backpack that the current market has to offer; it’s also very spacious, decently light, and by far the most reliable model within the boutique price point category.

Speaking of which, it’s also among the most expensive backpacks out there. Even though you’ll probably need a bit of time to save up enough money for it, the reliability of its features could mean the difference between harmlessly breezing through heavy snowfalls and avalanches and not being so lucky.

It is decently spacious in spite of the fact that the built-in airbag takes up a good portion of the space. It rocks a designated helmet holder compartment, a hip belt stash pocket, as well as internal pockets for various skiing and mountaineering accessories.

Black Diamond’s Jetforce Tour 26L Backpack is supplied with robust and very reliable zippers. Given the fact that it was specifically designed for use in harsh environments, the zippers also feature elongated strips for easier access.

One of the main features of this backpack is the Alpride’s E1 airbag system; it’s fully rechargeable and reusable, but more importantly, it’s exceptionally reliable. The airbag’s pull strap is colored in orange for easier differentiation, and it can be activated regardless of where it is positioned. Ideally, it should stick out from one of the sides, but it will not affect its activating chance in the slightest.

The E1 airbag is nearly twice as big as the backpack itself, and it will spread evenly in the span of 180-degrees, cushioning the back, head, arms, and lower back at the same time. Additionally, it can be charged with either batteries or USB cable; it shouldn’t take longer than an hour for the system to get online.

Getting back to the pack, Black Diamond’s Jetforce Tour 26L Backpack sports thoroughly padded back and shoulders; it’s very comfortable to use, regardless of how cumbersome the load you intend to carry is.

Obviously, the thing you might not like so much about it is the fact that it costs a small fortune, but it’s worth every single cent due to its unparalleled durability and reliability. 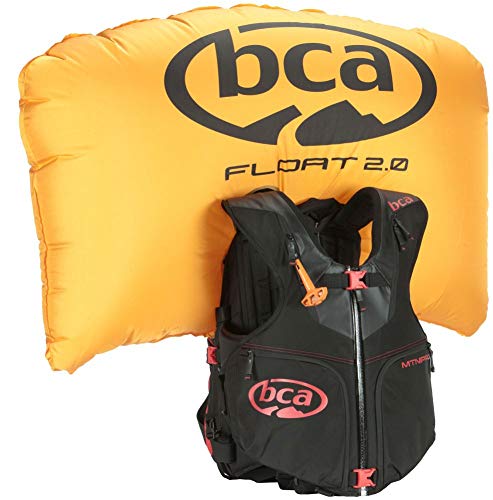 Next up is Backcountry Access’s Float Mountain Pro Vest; essentially, this is the go-to avalanche backpack for extreme hikers and mountaineers as it’s slightly bigger and bulkier than average.

What makes this backpack so great for outdoorsmen in general (for skiing, hiking, mountaineering, extreme photography, etc.) is the fact that it features a huge main compartment that can accommodate some of the biggest tools, such as shovels for example. It also comes outfitted with a myriad of accessory pockets and compartments.

The design of Backcountry Access’s Float Mountain Pro Vest is basically a hybrid of an airbag vest and a regular large-size backpack. While the backpack ‘houses’ most of the features in terms of item compartments and pockets, the vest features the airbag activator, shoulder pads, and two extra pockets for smaller items.

The capacity of Backcountry Access’s Float Mountain Pro Vest is approximately 20 liters, but it’s more than safe to say that you could fit a good portion of it through smaller accessories across the numerous side pockets and compartments as well.

Now, the reliability of this avalanche backpack is absolutely amazing; the pull-pin is oversized and in a different color, and it’s pretty sensitive, but not overly sensitive. The design of this backpack makes it easier to use the backpack’s features while not worrying about the built-in airbag’s activation, but it’s also making it slightly less comfortable to use.

Namely, the ‘vest’ part of Backcountry Access’s Float Mountain Pro Vest adds extra weight and somewhat limits arm movements. Nevertheless, if you value safety above comfort and convenience, this might be the perfect avalanche backpack for you.

Here we have Mammut’s Lawinen Rucksack airbag. In a nutshell, this is one of the most versatile and best-rounded avalanche backpacks that the current market has to offer. Although it’s pretty expensive, it comes supplied with the exquisite Mammut’s proprietary Airbag Technology 3.0, extra-thick shoulder straps, a massive main compartment, tons of side pockets for accessories, and more.

First and most importantly, what separates Mammut’s Lawinen Rucksack airbag from similar models is the amount of comfort it is capable of providing to the wearer. Nearly every single feature that it comes supplied with is reinforced with ultra-soft pads while the back features sturdy plating that supports both upper and lower back areas.

Another thing that makes this avalanche backpack different is the fact that its airbag system connects with the shoulder straps (as opposed to the back compartment or an entirely separate area).

The reliability of this avalanche backpack and its built-in airbag is unquestionable; the system is very sensitive and responsive, and the pull-pin is large and easy to access.

Another reason why this backpack is worth the hefty price tag is that it’s incredibly light and very comfortable for use, especially for longer periods of time. Furthermore, it’s made of highly robust materials and will be able to endure decades of harsh use. 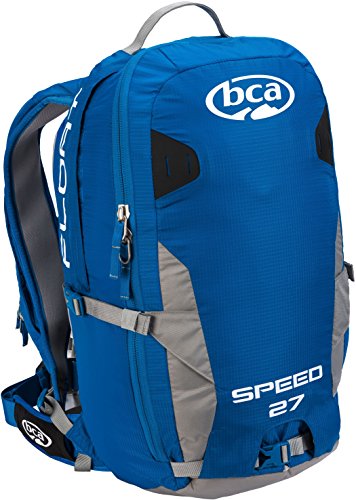 Here we are looking at BCA’s Float 27 Speed 2.0, which is an all-around avalanche backpack that offers durability, versatility, and premium performance for the buck.

In comparison to our previous picks, this model is a bit smaller, but its airbag is pretty large. In fact, it’s roughly about the same size as the one that BCA’s Mountain Pro Vest comes supplied with. In essence, people who happen to like that model but find the ‘vest’ part as limiting and confining should at least consider the Speed 2.0 variant;

This avalanche backpack rocks a decently sized main compartment, although there aren’t many side pockets for smaller items.

In terms of comfort, BCA’s Float 27 Speed 2.0 features a lightweight construction complemented by thick, padded shoulder straps; it also boasts an ergonomic design and a firm back panel that prevents pointy items from sticking into the wearer’s back.

One of the greatest things about this backpack is its main compartment; there’s enough space for larger tools (such as, for example, an avalanche shovel). The airbag system it comes supplied with is, as mentioned earlier, reusable and rechargeable via batteries or USB cables.

Moneywise, BCA’s Float 27 Speed 2.0 is much cheaper than most models we’ve reviewed up to this point. Its value for the money is undeniable given the fact that it offers space, flexibility, and comfort that far exceed the qualities offered by similarly priced avalanche backpacks. 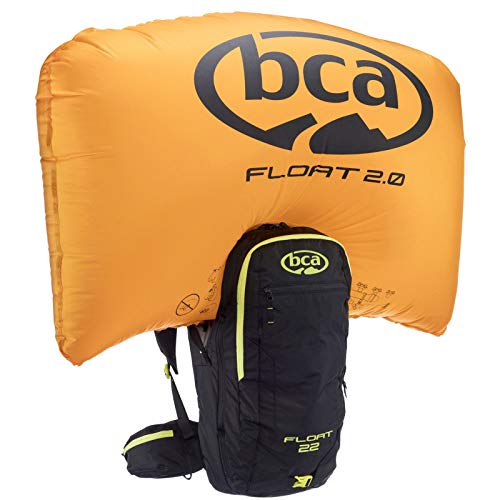 Let’s pull down the curtain with BCA’s Float 22 Avalanche Airbag. Generally speaking, this is a smaller version of the Speed 2.0 made by the same company; it offers slightly less storage space, but it comes supplied with the same utility features and the same airbag system.

This avalanche backpack is made of sturdy and lightweight nylon material; its volume offers 22 liters of storage space, although a portion of it is already occupied by the airbag system.

One of the greatest things about BCA’s Float 22 Avalanche Airbag is the DWR coated zippers that are both durable and very easy to access. Additionally, this backpack offers more side pockets than BCA’s Speed 2.0, allowing you to store an increased number of smaller items.

The shoulder straps of this avalanche backpack are pretty comfortable to use, although they are not as thick and feature slightly flimsier padding.

Last but certainly not least, BCA’s Float 22 Avalanche Airbag is the most affordable avalanche backpack in our review, and we highly recommend it to people who are on a cash-strapped budget.

Avalanche backpacks are basically large backpacks outfitted with an airbag system, so the main things you should be on the lookout for are the reliability of the built-in airbag, the volume of the backpack, and the comfort it can provide for you.

Simply put, the reliability of an airbag system is measured through several criteria: the ease of access of the pull-pin, the speed at which it inflates, and its durability. An airbag that pops after a couple of uses is all but reliable; on another hand, a sturdy airbag that takes a couple of minutes to inflate is just as useless.

Skiing, mountaineering, and similar hobbies typically involve quite a bit of gear. You’ll need a snow helmet, a shovel, a probe, skiing glasses, as well as numerous smaller items, such as a pocket knife, your personal ID, your wallet, and various other items.

Only those backpacks that are big enough to accommodate all of your items and the airbag system should be considered if you don’t want to cut your gear list short. Additionally, you should always keep in mind that a huge, bulky backpack isn’t as versatile as a smaller model with plenty of storage compartments.

The lighter the backpack is, the more comfortable you will feel wearing it. On the other hand, lighter backpacks are generally not as sturdy, so that’s something you should also keep in mind when deciding on what backpack model you’ll ultimately get.

What is an avalanche backpack?

Avalanche (or airbag) backpacks are basically skiing backpacks that feature a built-in airbag system that activates when a pull-pin is activated.

How does it work?

The system becomes operational by activating the pull-pin the airbag begins to inflate. Different models feature pins of varying sensitivity, but all models basically operate on the same principle.

Are mountaineering backpacks as good as avalanche backpacks?

In short, if a backpack doesn’t feature a built-in airbag system, it will not be of any use to you during an avalanche.