Most people don’t really plan camping trips if they know it’s going to rain beforehand; however, we can’t control the weather, and sometimes things go awry when we least expect. That’s why most people who know a thing or two about camping reinforce the seams of their tents with special sealants, either before the trip or just before it starts to rain.

We’ve scoured the market for the best performing, most versatile, high-value tent seam sealers and have come up with the following list.

We’re starting off with 3M’s Dynatron Auto-seam sealer caulk, which is at the same time one of the best tent seam sealer models out there. 3M is a huge brand in this particular line of the industry, and the Dynatron is one of the most versatile repair & waterproofing caulks they have to offer.

As a matter of fact, this model is equally great for cars and boots as it is for repairing the seams of tents. It’s decently fast, and it covers sprayed areas nicely and neatly. It boasts rapid drying time, and what makes it different from other ‘fast seam sealers’ is that it won’t be as gooey and sticky after a couple of hours.

In short, this is a perfect sealer model that you’ll want to bring with you on a camping trip; it’s fast-acting qualities complement the quantity of the bottle, which will allow you to patch up even the biggest tents and waterproof them in entirety. 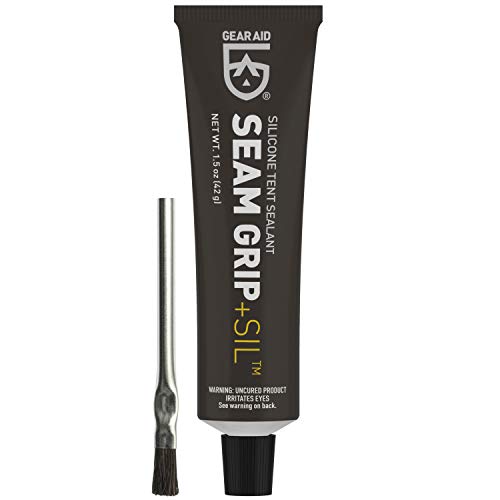 Gear Aid is one of the world’s most renowned camping accessories brands, and their Seam Grip SIL is an excellent representative of their quality. This is actually a package that contains top-quality sealer and a small, easy to use brush you can use to apply the adhesive with more accuracy.

In essence, this is a cheap bottle of seam sealer adhesive, which is both fast acting and permanent. What’s more, it’s actually pretty versatile in the sense that it can be used on virtually all silicone or nylon-made gear, including backpacks, boots, and even jackets and similar pieces of clothing.

Even though the package is quite smallish, it contains 1.5 ounces of quality adhesive that can be used to cover up to twenty four feet of tent seams (or other silicone and nylon-based gear). It’s also fairly cheap, which is a huge plus. 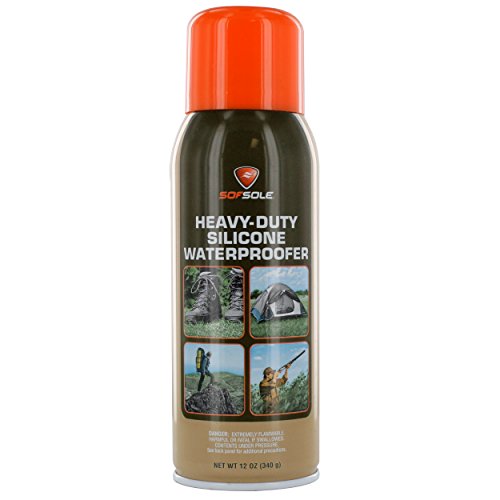 Next up is Sof Sole’s Waterproof spray that mostly works as a waterproofer; it features tiny bits of silicone in the formula, which can create robust and long-lasting bonds that aim to repel oil, dirt, as well as water from your tent.

The package contains 12 ounces, which is several times more quantity in comparison to most average seam sealer tubes; it’s also packed in an aerosol bottle that offers substantially easier methods of application (aim and spray).

It’s decently cheap, and it’s suitable for boots, tents, backpacks, and most camping gear and accessories made of nylon and silicone. 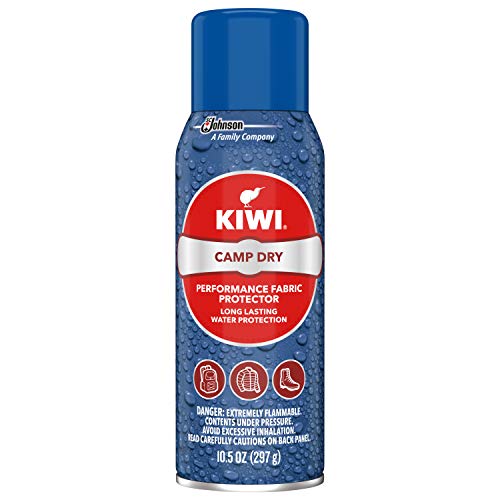 Here we are looking at a 3-pack bundle of Kiwi Camp’s water repellent fabric protector. Given the fact that it features a slightly weaker formula, it’s absolutely great for sealing up tent seams. On the opposite end, its performance is slightly weaker when it comes to patching and repairing tougher fabrics.

Each pack contains 10.5 ounces of non-silicone polymer formula that repels water or water from most light-duty fabrics, including tent rings and tent bags. The low-grade formula aims to preserve the initial breathability of the fabrics it is used on. Just like our previous model, this three-pack bundle features aerosol-packed seam sealer gels that are incredibly simple and straightforward to use.

The only thing that might potentially dissuade you from trying Kiwi Camp’s Water Repellent Fabric Protector is that the quantity might be a bit of overkill. This particular model (bundle) is best suited for people who are camping at large and quite frequently. 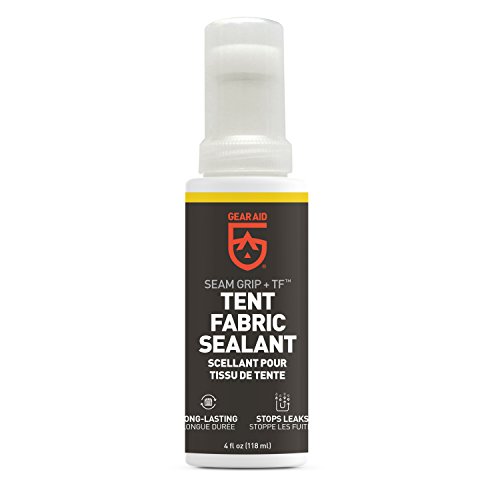 The first Gear Aid (SIL) seam sealer model in our review was a moderately-sized all-purpose fabric protector. The Seam Grip TF sealer has a substantially stronger formula, and it’s generally meant to be used in a bit different ambient.

This tiny 4-ounce package can actually be used to seal and waterproof up to eighty five square feet, which is roughly four times as much in comparison to the Gear Aid SIL package. It packs a strong, potent formula that can be used on heavier and rougher materials, but it shines the most when used on tents and camping accessories.

Unlike most low-performance seam sealers, the Seam Grip TF acts as a waterproofer and as a repair kit. It can easily patch up even larger holes while also providing protection from dampness and water. Just like our previous Gear Aid pick, it’s available at a bargain price.

3M’s Flexiclear Body Seam Sealer is a specially designed sealer that offers substantially more versatility than models we’ve reviewed so far. It might be a bit more expensive, but it also offers more value for the cash in turn.

First and foremost, Flexiclear packs a clear, medium-duty formula that bonds with the material it’s used on exceptionally quickly and dries just as fast. It also sports a caulk top for easier application, and you’ll get to benefit from its massive quantity for numerous camping trips (10 fluid ounces). 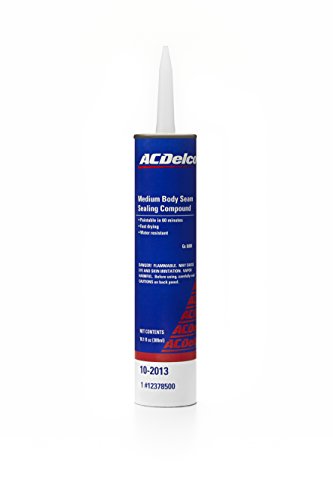 This particular model resembles our previous pick in more ways than one; ACDElco’s 10-213 Body Joint compound is a large seam sealant that can be used on some of the toughest materials, including leather, nylon, and silicone.

It actually works on tents made by the sturdiest materials, whereas low-impact models would invariably fail.

Once the compound forms up around the seams it remains flexible, and more importantly, it won’t stain the edges, allowing them to retain their initial durability level.

It’s a bit more expensive than average, but it’s still nearly half the price in comparison to Flexiclear. 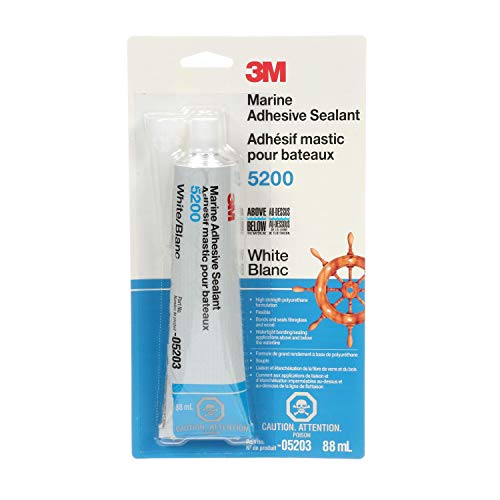 The Marine Adhesive Sealant 5200 is an excellent choice when you need to quickly patch up individual areas of your tent.

Contrary to what most people think when they see how small the package is, the 3M Marine sealant actually packs an exceptionally strong formula that forms a strong cohesive compound on the seams, granting them impeccable protection against water, dampness, and oil.

The bonds are pretty permanent, so the areas you patch up will remain waterproof for long periods of time. Even though the compound won’t stain the seams, it’s quite hard to get rid of, which is the only downside of 3M’s Marine Adhesive Sealant. 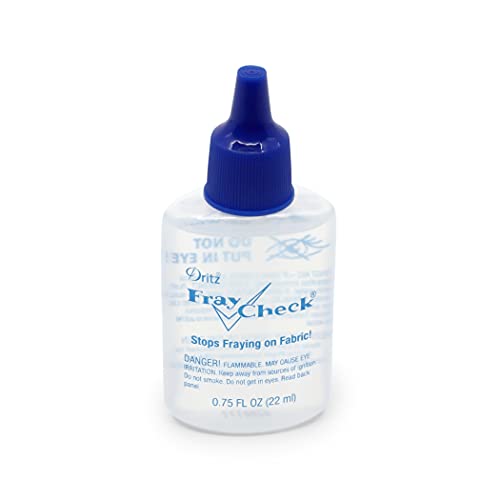 Dritz’ 674 Fray Check is the first liquid-based seam sealant in our review; this is a 0.75 fluid ounce package that is perfect as a pocket tool to use when you need it.

Basically, it boasts a low-grade formula that forms and acts rapidly; on the downside, it also evaporates and disappears on its own after a couple of days.

The formula of Fray Check is comprised of N Propanol, Water, and Nylon Terpolymer; it’s easy to wash, which also means that it will hardly survive heavier downpours of rain.

Our final pick is Coghlan’s Seam Seal; this is a 2-ounce package that features a colorless, easily washable formula that can be used to waterproof tent seams or to reinforce previously used high-impact sealants.

It’s very cheap and it comes in a very small package that can fit inside a pocket, which is two of the most notable benefits of it.

There are many different types of seam sealants, and it’s up to you to determine which models suit your needs the most.

The first thing you should consider is the potency of the formula of the sealant; if you want to enhance the seams exclusively, you don’t need a high-impact formula. On another hand, if you want to reinforce the entire wing of your tent, that’s where a strong formula might come in handy.

Secondly, think about how long you want the seams to remain ‘reinforced’. If your camping trip is going to take several days, you should find a sealant that features a long-lasting formula. Liquid-based formulas usually work for a few days after which they lose their potency.

Lastly, you should take the price into consideration. There are models that are well beyond $50, as well as models that are under $5. It’s up to you to determine your budget before making the final decision.

What are tent seam sealers?

Essentially, seam sealers are compounds (oily or liquid) that are meant to reinforce the seams of the tent, granting them waterproof qualities. The best models also enhance the overall durability of the seams as well.

Are there different types of seam sealers?

Generally speaking, the two most common types of seam sealers are chemical and liquid. Chemical-based sealants are more potent and have effects that last for longer periods of time. They are not as environmentally-friendly as liquid-based ones, and they are slightly more difficult to clean (remove).

Should I use seam sealants before heading out?

The answer to this question largely depends on the sealant you intend to use. Some sealants can last for months while others evaporate and lose their efficiency after a couple of days; others take a couple of hours to form cohesive bonds while some take merely a couple of minutes.

Is it necessary to seal the seams in my tent?

Essentially, it’s better to be safe than sorry. Sealing your tent’s seams will ensure that no water gets into your tent whereas not doing so will put you at risk (depending on the severity of the downpour).

Best Zip Together Sleeping Bag in 2022
How To Keep Your Beer Cold While Camping
How Do You Shower When Camping?